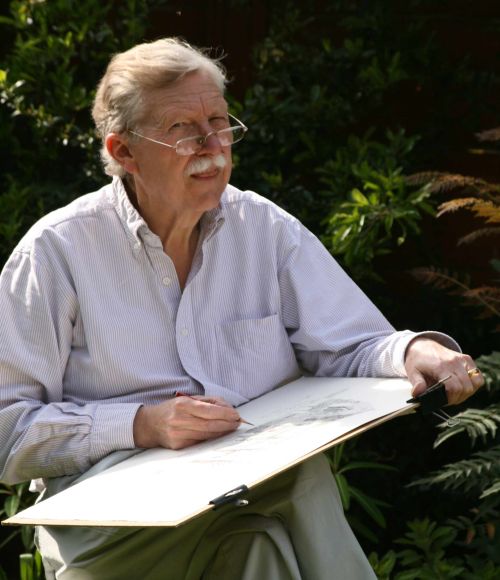 I was born in Chelmsford where much of my schooling took place. By profession I was a Chartered Surveyor but since retiring am able to spend more time drawing & painting than hitherto. I have been painting in watercolour and exhibiting for the last 48 years.

My pictures have featured in two books dealing with painting in watercolours & art techniques. They have been & hung and sold in various exhibitions including:

Most of my inspiration has been gathered from travelling throughout Great Britain and France. Subjects are often landscape, architectural & topographical subjects with details creeping in from time to time. Pictures mostly reflect the atmosphere of place & are often culled from some 100 sketchbooks accumulated over the last 45 years.

Although I have lived and worked in Bedfordshire, Surrey & Kent I am currently living in Lincolnshire where The Wolds & the undulating Lincolnshire countryside has inspired watercolours that can be seen in the GALLERY. My wife and I have now moved from Wragby to the southern part of Lincolnshire, Sutton St Edmund, in the Fens, near the Cambridgeshire border where I am delighting in the huge skies.

I tend to use a somewhat restricted colour palette & work predominantly on rough watercolour paper. I am often more interested in the atmosphere of a place than the precise detail & particularly enjoy laying dark toned washes. Nowadays I find great satisfaction in mixing colours that don't just relate to the desired colour but also accommodate the technical properties of the selected pigments.

I have been influenced over the years by individual watercolourists both past & present and in particular by :


Without doubt the greatest influence and encouragement came from my one-time tutor John Blockley RI whose untimely death I continue to lament.

I am married to Margaret & we have a married daughter, Sarah, who trained as a graphic designer and now lives in the Fens. Margaret and I are committed Christians and looking forward to worshiping with yet to be discovered friends in our parrt of the Lincolnshire Fenland.
Next
Previous